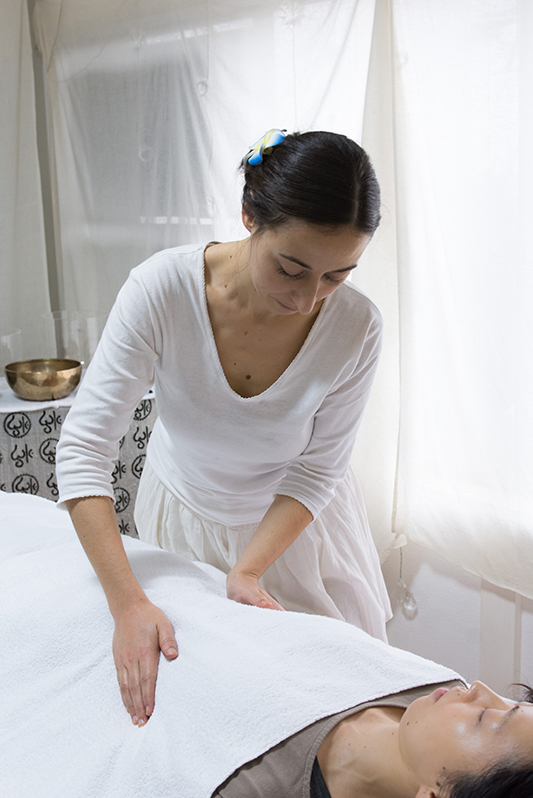 Practises in the global vision of the being, integrated in its environment. So-called holistic approach [from ancient Greek ὅλος / hólos meaning "whole"].

Addressed to all audiences - At all stages of life.

Remote consultation according to needs, with adapted tools.

*¹ Except for complex psycho-emotional cases requiring a perfect command of Japanese.

Kinesiology, or science of movement, is based on the alliance between traditional Chinese medicine and chiropractic. This discipline is in constant evolution thanks to the numerous discoveries in neurosciences.

It emphasises the interconnection between the meridian system, the nervous system, the organs and the muscles. Created in the 1960s by Dr Goodheart, the practice is based on a set of gentle, preventive and curative techniques.

By testing the muscular reactivity, the therapist identifies the original cause of the blockages memorized by the body, to determine its dysfunctions in order to correct them.

These elements are analysed according to the concept of the triangle of health, which interconnects: the structural-anatomical, the nutritional-biochemical, the mental-emotional.

The kinesiologist will guide the body towards a rebalancing of the interaction between these 3 elements to enable it to reach a resilient homeostatic state.

Course of a session :

After a time of exchange, during which the client shares his/her problems, the therapist helps him/her to become aware of, and then to verbalise a first objective to be reached.

According to this goal, she will locate the conflicts of muscular tonus indicating a stress in the body.

Then, the practitioner will plot these dissonances on the triangle of health to evaluate the elements to be rebalanced according to their nature, and will try to contextualise each resonance in the person's experience, up to the original origin.

Guided by this first phase, the therapist then proposes a choice of techniques adapted to the situation among the following fundamentals of kinesiology:

These practices are reinforced with a range of tools specific to each practitioner, according to their experience and expertise.

Throughout the process, the person is accompanied in the awareness necessary to put the self into perspective. This distancing leads to a modification of their physical posture, behaviour and actions.

The person will thus be able to go beyond his or her limits, progressively accessing his or her full potential to gain new momentum.